The following article appeared in the "The Age" newspaper in Victoria, Australia.
Durham's voice stays pure despite the blows
April 22, 2010
OH, THAT Judith Durham voice. So honey-pure you could spread it on toast - but there are many reasons why she may never have sung at all.
She had asthma when born in July 1943 at Essendon's Llandyssil private hospital and, at age four, she caught the measles, which left her with a life-long lung complaint called bronchiectasis. During later childhood years in Tasmania, Durham was taken to hospital to have her adenoids and tonsils removed, a precautionary operation averted only when doctors, concerned at a polio epidemic, sent her home.
In the 1960s, as the 22-year-old lead singer of the Seekers, Durham had nasal polyps on a tour of England - and after a car accident on the Calder Highway in May 1990, she awoke from surgery to find her voice temporarily gone because of the tubes that had been put down her throat.
So many body blows - yet here is that unmistakable bell-like voice, quietly giving me a world-premiere performance of one of her own songs at a table in a St Kilda restaurant. Well, not quite premiere: she says she sang a few bars to Rolf Harris while he was in Australia recently. ''I had always worried that the tune was one of Rolf's,'' she says. It wasn't.
Her song is a cute kids' ditty called Willie Fly and contains lines such as, ''How would you like it too, if a fly walking by, hit you back with a whack?''
Defending blowflies? Well, Judith Durham, 66, is a vegetarian who doesn't eat eggs but, as an Aussie of the old school, she has to confess that flies don't quite fit her template of species worth protecting. ''Look, I do spray flies,'' she says, ''but I have a really big conscience.''
It is many years since the Seekers conquered the world of music, and Durham is now a well-established solo performer and composer, scheduled this year to record a CD of songs she wrote about each Australian capital city. But she is here now to talk about another personal body blow, the death from motor neurone disease (MND) of her husband, pianist Ron Edgeworth, and the frustrating shortage of money that still hampers the search for a cure 16 years later.
''It is just such a peculiar illness,'' says Durham, a patron of the MND Association. ''Ron had always taken his fitness regime very seriously. He ran every morning, was a vegetarian, had given up alcohol. I first noticed the symptoms in September 1992 when he returned from playing in London.''
Edgeworth had been ill after a course of antibiotics for dental problems and Durham noticed his speech had changed. ''I had this awful feeling he was going to die,'' she says. ''It took three months before the doctors were sure, because there is no specific test. Ron was a tremendous optimist and thought his body would heal itself. He'd always believed that he would live to 120 and that I, with my lung condition, would fall off the perch about 60. He kept driving the car but he eventually had a fall in the bathroom and broke his collarbone and couldn't use the car after that.''
Edgeworth died late in 1994. He and Durham had been married 25 years. ''MND kills more than 10 Australians a week,'' she says. ''The average sufferer dies 27 months after diagnosis. That's why this year the MND Association is now pushing for a national disability insurance scheme to help carers cope during that period.''
For Durham, the last two years with her husband were harrowing. She has not remarried but is not short of offers. ''I get quite a few proposals on my website. That's very nice. I'm thrilled about that side of life.'' 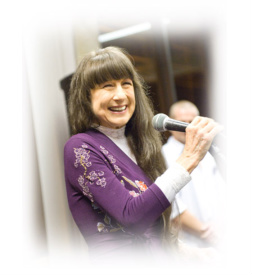